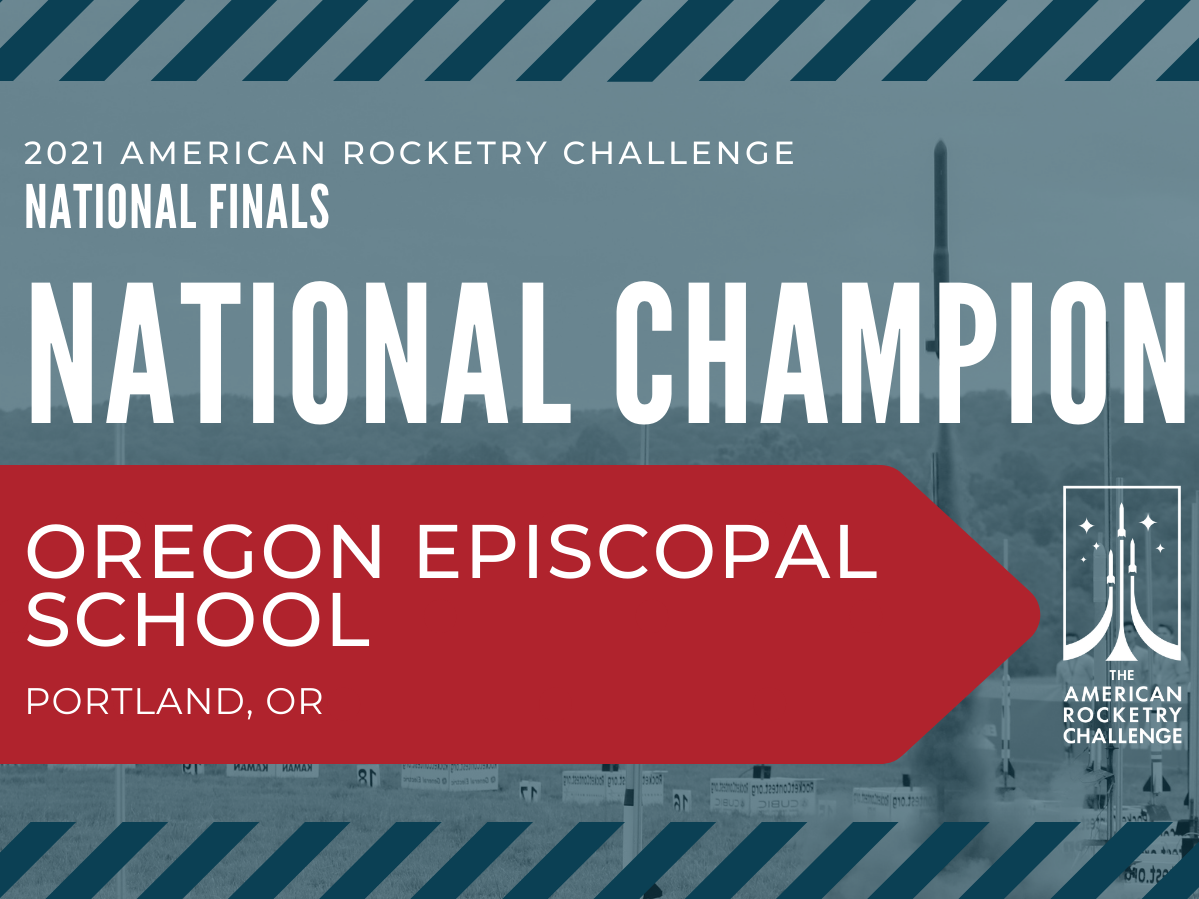 “We all watched the awards ceremony on a Zoom call from across the world, and we still can’t believe we won,” said team co-captain Kara Gaiser. “Working virtually, we learned the most this year out of all our past years competing. We developed a system to ensure each team member—even those staying with family in Thailand—could contribute equally to everything from coding to 3D modeling. The American Rocketry Challenge has been an amazing focus for us, providing our whole team an opportunity to bond and work outside of school.”

After the COVID-19 pandemic caused the cancellation of the 2020 competition, 100 teams from 27 states and the U.S. Virgin Islands competed for $100,000 in prizes at the 2021 National Finals, distributed across 10 launch sites around the country between June 11th and 20th. The prize pool will be split among the top five teams, with Oregon Episcopal School taking  home the top prize of $20,000 and winning the title of National Champion. Additional prizes were awarded for teams who showcased STEM and branding principles in separate marketing and presentation awards. The top 25 finishers will also receive an invitation to participate in NASA’s Student Launch initiative to continue their exploration of rocketry with high-powered rockets and challenging mission parameters.

FAST FACTS ON THE ROCKETRY CHALLENGE:

Now in its 19th year, the American Rocketry Challenge has become the aerospace and defense industry’s flagship program designed to encourage students to pursue studies and careers in science, technology, engineering, and math (STEM).

“Congratulations to the winners and competitors of this year’s American Rocketry Challenge,” said Greg Hayes, Chairman and CEO of Raytheon Technologies. “Your work and innovation are creating a brighter future in aerospace and defense. With a tremendous focus on STEM – and building skills through team work, problem solving, working with diverse teammates and overcoming challenges such as working virtually – every competitor and every team proves what we experience every day at Raytheon Technologies: companies don’t innovate, people do.”

“The unprecedented challenges posed by the pandemic were no match for our intrepid rocketeers,” said AIA President and CEO Eric Fanning. “Their hard work and ingenuity were on full display at the National Finals, proving their ability to rise to any occasion. We are proud to foster a passion for aerospace in these bright young students as they grow into the next generation of STEM leaders.”

For more information about the American Rocketry Challenge and to view the list of all award winners and national finalists, visit our site: www.rocketcontest.org.