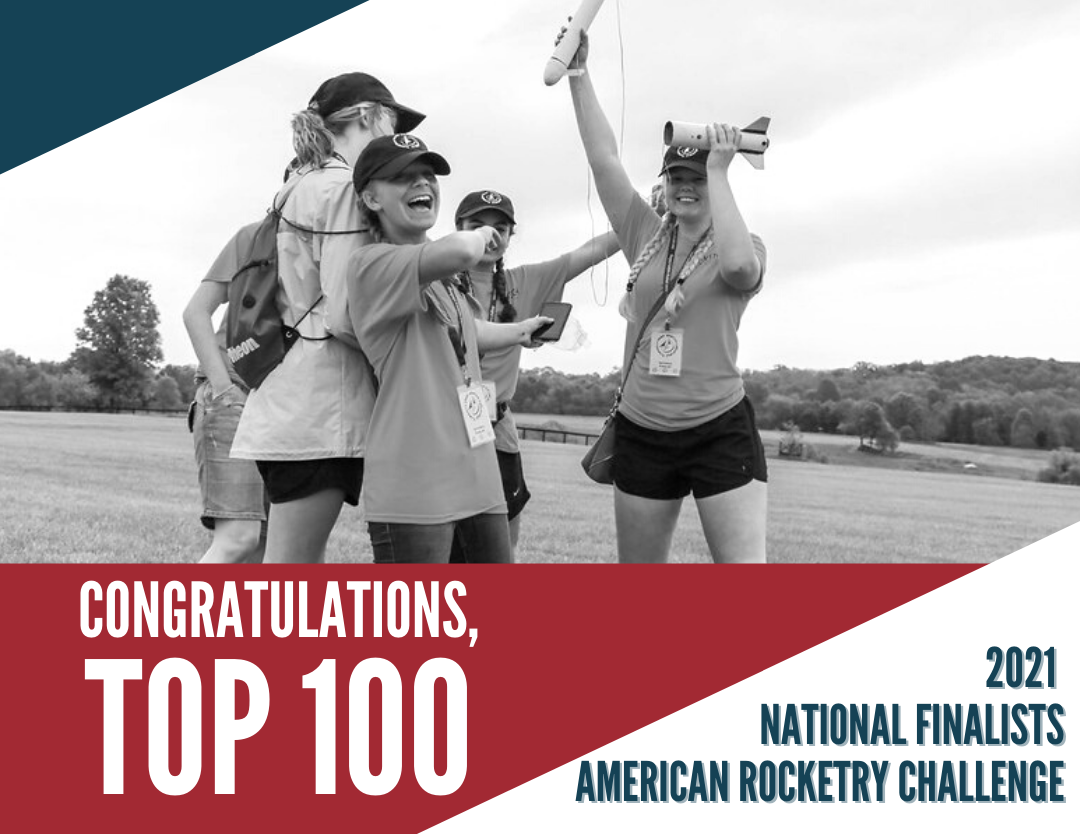 Student rocketeers from 27 states and the U.S. Virgin Islands will compete next month for more than $100,000 in prizes and the title of National Champion

Arlington, VA – Earlier today, the American Rocketry Challenge announced the teams competing in this year’s National Finals. After the COVID-19 pandemic caused the cancellation of last year’s competition, 100 teams from 27 states and the U.S. Virgin Islands were selected to compete for $100,000 in prizes and the title of National Champion in the return to flight for the 2021 competition. See the top 100 teams here.

The American Rocketry Challenge is the aerospace and defense industry’s flagship program designed to encourage students to pursue study and careers in science, technology, engineering, and math (STEM).

In accordance with all federal, state, and local health guidance, this year’s Finals will be held at 11 launch sites across the country. Those launch sites are located in or near:

Sponsored by the Aerospace Industries Association (AIA), the National Association of Rocketry, and more than a dozen industry partners, the American Rocketry Challenge is the world’s largest student rocket contest. This year, 615 teams representing 45 states, the District of Columbia, and the U.S. Virgin Islands designed and built model rockets in hopes of qualifying for the National Finals. Among this year’s teams, 21 are first-time competitors.

The American Rocketry Challenge promotes friendly competition among teams from diverse socioeconomic backgrounds, ethnicities, and geographies—from the Great Plains to major metropolitan areas. Numerous teams launched fundraising campaigns in their communities to make their participation possible this year. The American Rocketry Challenge also offers $2,000 grants to eligible Title I schools to launch their own rocketry teams.

“In a year full of extraordinary challenges, teamwork and determination propelled these talented rocketeers to qualify for the National Finals,” said AIA President and CEO Eric Fanning. “While the American Rocketry Challenge may look different this year, it continues to be a bright spark of inspiration for future STEM leaders and the aerospace and defense industry.”

First launched in 2002, the Rocketry Challenge has inspired more than 80,000 middle and high school students to explore education and careers in STEM fields. The competition challenges middle and high school students to design, build, and fly a rocket that meets rigorous altitude and flight duration parameters through a series of certified, qualifying launches. This year’s challenge requires teams to safely carry a payload of one raw egg to three different altitude and time goals. With their first flight goal and qualification flights done, teams must fly to 775 feet within 39 to 42 seconds, and then to 825 feet within 41 to 44 seconds at the National Finals.

Follow and support your local team on the road to National Finals using the official hashtag: #TARC2021.